An educational opportunity of a lifetime 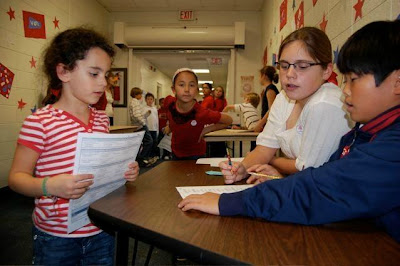 This year, K-12 students have a rare chance to learn about, watch and experience civics, government and leadership in action.

Today's students will one day become the leaders of our communities and nation. What, and how, they learn is critical to the vitality of America's democracy and the economy of the 21st century. Together, let's prepare them in the most effective way possible.

How can you or your organization make a difference? By donating today to GenerationNation! You'll give students - and our schools and community - the advantage of K-12 civic literacy through smart, fun, engaging, educational and always nonpartisan programs and activities.

The path to Charlotte's role as host of the Democratic National Convention didn't begin when national party leaders first solicited bids from prospective cities. It began when smart civic leaders had an idea, put it into motion, and helped to lead Charlotte to the world stage.

At GenerationNation, that's just the kind of knowledge, can-do attitude, active citizenship and civic leadership we hope to instill in K-12 students. Through fun, educational and engaging programs that connect the classroom with hands-on learning opportunities, GenerationNation, a nonpartisan nonprofit (501c3) organization, educates K-12 students to lead in their schools, communities and nation.
Your contributions help GenerationNation to:

Importantly, as Charlotte's K-12 civic education champion for the last 20 years, GenerationNation will continue the legacy of Charlotte in 2012 into the future. That's long after debates of the city's best BBQ sauce have ended and the last bunting has been rolled up, saved for another day.


Give K-12 students an educational opportunity of a lifetime

Will you help GenerationNation give K-12 students an educational opportunity of a lifetime? Donate today!

See photos of GenerationNation at work