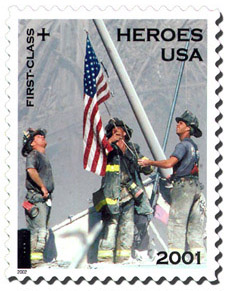 September 11, 2011 is the 10th anniversary of important events in our nation's history. In addition to learning about what happened in 2001, you can use 9-11 as a civic learning opportunity for family or classroom dialogue. Here are a few discussion topics:

Leaders wear many "hats". For example, on September 11, 2001, President Bush was visiting a Florida classroom when he was told about what was happening in New York. He was making a public appearance, something that elected officials of all levels do every day. He also had to think about the country's safety and act as Commander-in-Chief, among many other things. What are some examples where you wear different "hats"? (example: you might be a son or a daughter, a student, a friend, a brother or sister, a soccer player)

Leaders have to know how to react. When President Bush was told about the attack, he paused, and then continued to talk with the class. A short time later, he addressed the nation about the news and then left to carry on his other duties as president. If you were a leader, how would you react to news like this? Would you run out of the room screaming? What would you do to inspire citizens and give them confidence?

Leaders work together even when they don't agree. The events in 2001, and the months afterward, brought together different kinds of people, including people who normally disagree politically. They worked together to achieve common goals. Even today, to commemorate the 10th anniversary of September 11th, Presidents Clinton, Bush and Obama are working together to help the families who lost loved ones, and keep the country focused on the importance of this event in history. They have different political viewpoints, but they work together. What are some examples when you have worked together with someone to do something important? Did it matter if you agreed with that person about different things? Did it make you understand that person better?

First responders - emergency professionals such as police, firefighters and medics - are responsible for a community's public safety.  In the 9-11 events, many New York City police, firefighters and other emergency personnel were involved in rescuing people at the World Trade Center, keeping people on the street safe, and helping in general. Many of them lost their lives while they were trying to help others. Have you ever seen police, firefighters or medics in our community? What were they doing? Why is it important that they do what they do? What kind of person chooses this kind of career? Is this something that interests you?

The September 11 events, in 2001 and today, involve different levels of government.  Many of the emergency personnel who responded to the World Trade Center and New York's mayor were a part of the local government there. The Port Authority, which was involved there and in other places, is a function of state government. (Actually, a shared operation of New York and New Jersey state governments.) The air traffic controllers who talked with and tracked the airplanes are part of federal, or national, government (Federal Aviation Administration). The President and military are part of federal government. Can you think of other examples where different levels of government work together? Do you think this is an easy process? Why or why not?

The police, fire department and medics are departments of local government. Much of their funding comes from the local government budget, funded through taxes and other sources. Each year, officials have to decide how to budget their money to run the community. This means they have to set priorities and divide their money among the different choices. Those decisions can be hard.  Here's an outline of how Charlotte, Mecklenburg and towns fund public safety and other budget priorities in 2011-12. If you were a local government official, how would you make important budget decisions? In your opinion, what is important to fund? What is less important? Why?


Economic development is important for local governments. In New York, city leaders have worked hard to plan the best way to both remember the events of September 11th and also re-build near the site. Commemorating the lives lost is important to the families and because it is an important part of the city's, and country's, history. It will also be a place where tourists can visit. Office buildings can house businesses, which give people jobs. When people visit the city, and when they have jobs, and businesses make money, the economy is better. If you were in charge of a city where something like September 11 happened, what would you want to build on the site? Buildings? A park? A statue? Can you think of examples of things the city has built here to bring jobs, tourists, or both?

You don't have to be the President or a firefighter to make a difference. In September 11 events, many people helped with the rescue effort. They worked alongside police and firefighters, or performed heroic acts on their own. They helped people find ways to get out of the World Trade Center buildings. They helped them find safety when the buildings collapsed. They helped the victims' families. They comforted strangers when they were scared. What are some ways that you can be a community helper, a good citizen?

Citizens work with leaders and governments. After the September 11th events, many of the family members of the victims worked to make a difference. They talked with leaders and the governments about making sure that September 11th would be remembered in an appropriate way in New York, Pennsylvania, Washington and across the US. They asked the government to review what happened, and to report their findings to the public. Why do you think citizen involvement was important to making things happen? How can citizens continue to remember the September 11 events or work with governments and leaders to ensure it never happens again?  How can you make a difference?